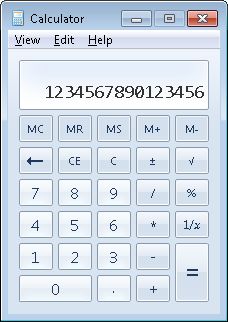 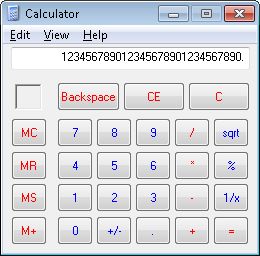 The Windows 95 version of Calculator is on the left and the Windows 7 version is on the right. As you can see, the buttons are the same, but someone at Microsoft felt obliged to rearrange them, just to make things difficult for anyone used to using the old version of Calculator. There isn’t a good reason for the change except to change for change’s sake. The Windows 7 version does have larger numbers, but at the expense of providing room for larger calculations. Personally, I’d prefer the Windows 95 version because sometimes I do need to perform really large calculations. Both versions of Calculator offer features such as digit grouping, so there isn’t any change here either. In short, Windows 7 offers less capability in a rearranged format that makes it hard for people who are used to the old version of Calculator to use it-breaking the rules of good design.

The problems get worse, unfortunately. I never used the Standard view of Calculator because I need to perform programmer math and scientific calculations relatively often. I did look into getting a calculator from somewhere similar to bestcalculators.net, however, I found that using the computer’s calculator a little easier for me while I worked. Switching to Scientific view in the Windows 95 version of Calculator, you see the perfect interface as shown here. 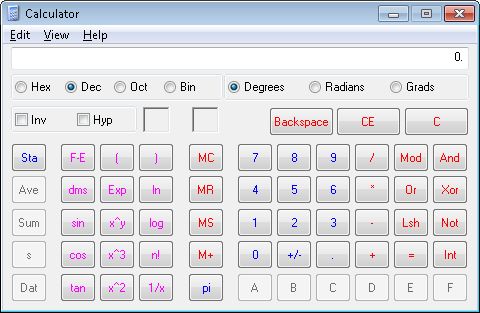 During the time I worked with Windows 95, I never switched out of this view. All I did was start Calculator whenever I needed it and did the math that I needed to do. Never once did the view I was in enter my mind. That’s great design! Users shouldn’t have to think about how your application works-the user’s only thought should be how to get work done.

The Windows 7 version of Calculator now has four modes: Standard, Scientific, Programmer, and Statistics. Every time I use Calculator now, I must first figure out what I want to do and change the view appropriately-wasting time and effort in the process. The views unnecessarily limit my options. For example, look at the Programmer view. 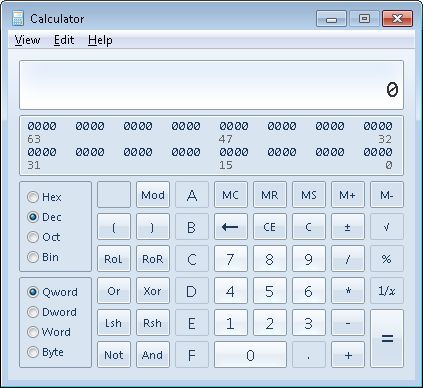 I do gain access to the RoL (rotate left) and RoR (rotate right) buttons, but I can’t think of when I’ll need them. The modern languages that most developers use don’t actually require these buttons. If I were using assembler, they could see some use, but I don’t remember ever using rotate left or rotate right with C#, Visual Basic (any version), Python, or even C++. So, these buttons are extraneous and only serve to complicate the interface. In addition, I do gain a bit display, which could prove helpful at some point, but I found that the Bin view on the old version of Calculator worked just fine and served my needs well. However, notice that the decimal point button is disabled. The loss of this button means that every time I have to perform any sort of math with a decimal point, I have to switch to another view. Programmers do use floating point numbers! So, a capable programmer calculator has been replaced with something less useful-something that makes me irritable and work harder. 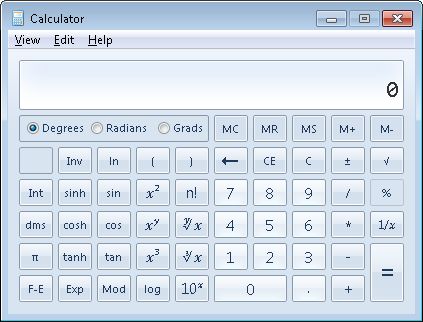 Before someone writes to tell me that the new calculator has square root, cubed root, and root to any power buttons, the Windows 95 Calculator has these features as well. You just had to know how to use a calculator to understand them. Let’s say you want to find the cubed root of 27 using the Windows 95 Calculator. Simply type 27, check Inv, and click the x^3 button. You’ll see the cubed root answer of 3. Not convinced? OK, let’s try a quad root. Type 16, check Inv, and click the x^y button. Now, type 4 (the quad root) and press the = button. You’ll see the quad root of 16 is 2, which is the correct answer. The Windows 7 calculator adds nothing new in this regard-just more buttons to hunt and peck!

In short, the new Calculator is an example of a failed interface update. Most people will find that they have to constantly switch between views to get anything done. When you force people to think too much about the interface, they tend to get grumpy, less productive, and end up tossing out the application at some point. Personally, every since I found the Windows 95 version of Calculator runs just fine on my Windows 7 system, I’ve been using it instead of the broken product Microsoft has offered. The Windows 95 version truly is the superior application. Let me know your thoughts on Calculator and on application design in general at [email protected].