In the previous post, Exploring the GrabAPicture Application (Part 2), you created frmMain, the first form that the user sees when using GrabAPicture in GUI mode. Someone wrote in to tell me that I forgot to include the form settings in the table. I looked back and found they’re correct, so here’s the settings you need for frmMain:

The form also sports an Icon property setting that I’ll discuss in a separate post for all three forms. Notice that the form uses the FixedDialog style, which is something you should consider for any form like this one that doesn’t include re-sizable elements. To make the form keyboard friendly, make sure you always include the AcceptButton and CancelButton settings so that the form reacts as expected when the user presses Enter or Escape.

On to the frmConfigure form. This form contains the list of local and remote settings. I had originally thought about creating just one list. However, there are times where a person works without an Internet connection or would prefer to use Internet sources for the desktop wallpaper than local sources. A local source is one that the user can access through a local drive or a network connection, while a remote source requires a URL for access. The URL can be anything that the .NET Framework can process, including the output from a Web service as long as that output is an image. You can’t use an entire Web page as a source because the Web page would contain non-graphic elements, but you can access a particular image on the Web page. Here’s how the form appears in the designer. 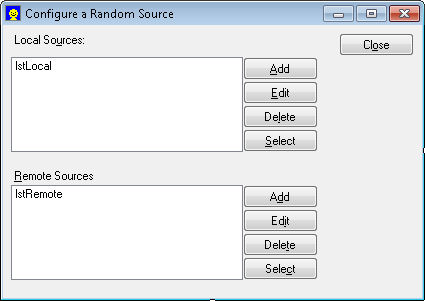 As you can see, there are separate sets of controls for local and remote sources. The following table tells how to configure these controls.

Notice that this form isn’t displayed in the Taskbar. The ShownInTaskbar setting is set to False. You only want to display the main form in the Taskbar to avoid confusing the user.

The third, and final form, is a multiuse form. The application uses frmAddEdit in four different ways, but could potentially use it in other ways:

There isn’t any way to predict which task the user will perform most often, so the form uses the Add a Local Entry task as the focus for the controls. The calling form, frmConfigure, will change the frmAddEdit as needed to meet a specific need. The basic form looks like this. 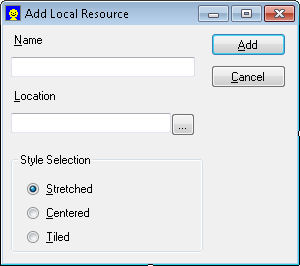 This form has a few extras on it that you’ll learn more about when you write the code. For example, the ellipses (…) button only appears for local resources. It works with an OpenFileDialog control that isn’t shown on the form to help a user find a local resource on a local drive or the network. The following table contains the settings for this form.

Notice that this form can have an AcceptButton and a CancelButton setting because there are default actions for both. As with frmConfigure, frmAddEdit doesn’t appear in the Taskbar.

The next installment will begin by discussing the icon used for this example. It’s nothing fancy, but there are some tricks you need to know about when working with icons. Let me know if you have any questions at [email protected]. You can see the next post in this series at Exploring the GrabAPicture Application (Part 4).