One of the ways in which we store food is as juice. Rebecca makes juice out of a number of items including tomatoes, apples, pears, and grapes. Of all of the juice sources, however, tomatoes are probably the easiest to work with. We’re having a stellar tomato year, so Rebecca decided to make tomato juice today. Of course, the tomato juice starts out with tomatoes. We used an entire bushel as shown here. 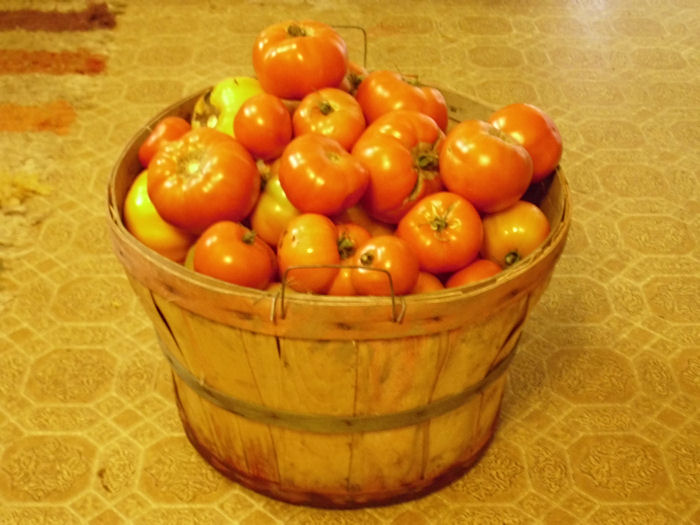 If you know how big a bushel basket is, you can see that our tomatoes are quite large this year. Fortunately, they’re also quite meaty. If you’re going to work with this many tomatoes (and believe me, this is only the beginning), you need some way to convert them to juice quickly. There are a number of tools available to perform the task, but our tool of choice is a Victorio Strainer: 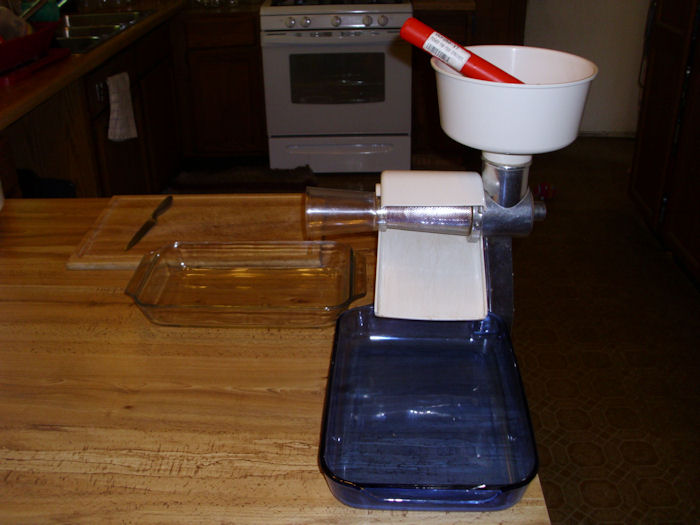 In order to use the Victorio Strainer properly, you need to provide two containers. The first holds the juice and it sits right below the output tray (the blue dish in the picture). The second holds the seeds and skin and it sits right below the strainer horn (the clear dish in the picture). Using glass works best for high acid foods such as tomatoes; otherwise, you can get a metallic aftertaste in the juice. Below the strainer (out of view of the picture) is a 5 gallon bucket to hold any liquid that comes out of the strainer (some leakage will occur) and to provide a place to put tomato that is cut out because it’s damaged in some way.

We use a two-person setup. One person (usually me) cranks the Victorio Strainer, while the other uses a knife and cutting board to cut up the tomatoes and place them in the hopper. A two-person team can whip through a bushel of tomatoes quite quickly. We did it in just over an hour this morning (and that included some cleanup and other chores, such as moving the juice to the stove).

The tomatoes today included a mix of red and orange tomatoes. Our garden has several varieties that compliment each other. As with a fine wine, a good tomato juice is the result of mixing several kinds of tomato together. Generally, if you have good tomatoes, you’ll get mostly juice and pulp, with very little in the way of waste as shown here. 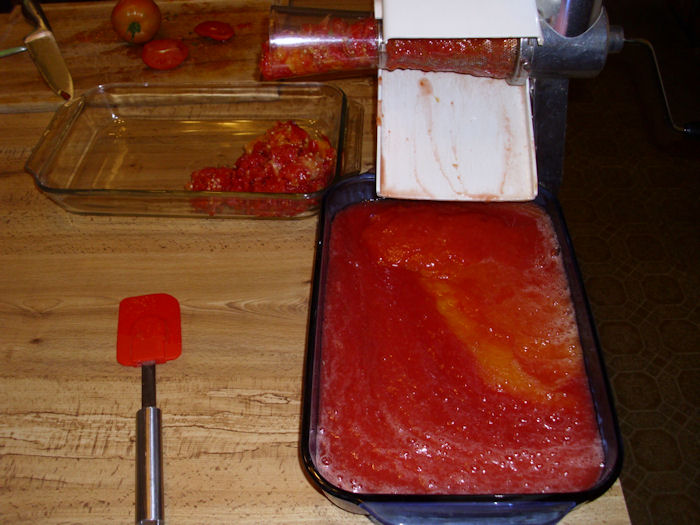 You’ll need a spatula to get the juice and pulp off the output tray. It also pays to clean off the outside of the strainer (the part with all of the holes in it) from time-to-time. A full bushel of tomatoes will easily fill a large pot like this one with space left over. (We asked a friend in the restaurant trade to purchase this professional quality pot for us, but the selection from Winware is quite nice.) 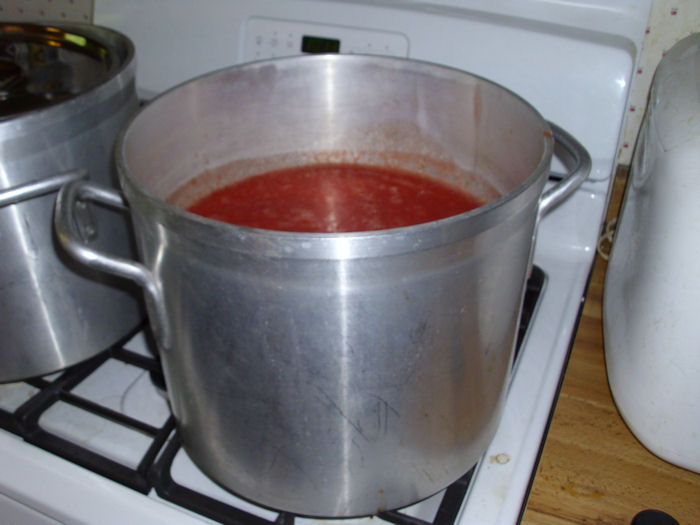 Rebecca uses the instructions found in the Ball Blue Book to can the juice. That means raising the temperature of the tomato juice to 190 degrees. While the juice is cooking, Rebecca adds a little salt (not much is needed) and spices. Before she pours the juice into the jars, she adds two tablespoons of lemon juice to each quart jar to raise the acidity level. The juice doesn’t require pressure canning. Because this is an acid food, you can use a boiling water bath like the one shown here. 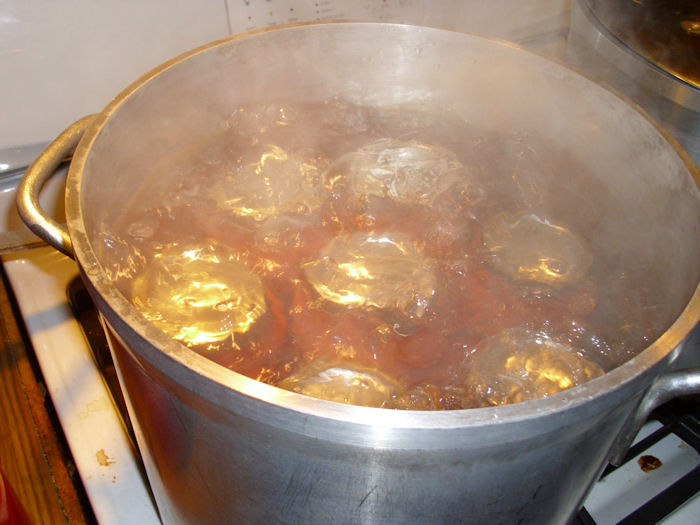 In order to ensure the juice won’t spoil, you process it for 40 minutes after the water comes to a boil. Normally you can fit seven jars into a large pot like this one at a time. You could also use a canner, but we found that we kept burning the bottoms out of the pot and it was costing more than buying a good pot to begin with.

The result is these lovely quart jars of juice. One bushel of tomatoes produced 17 quarts of juice. 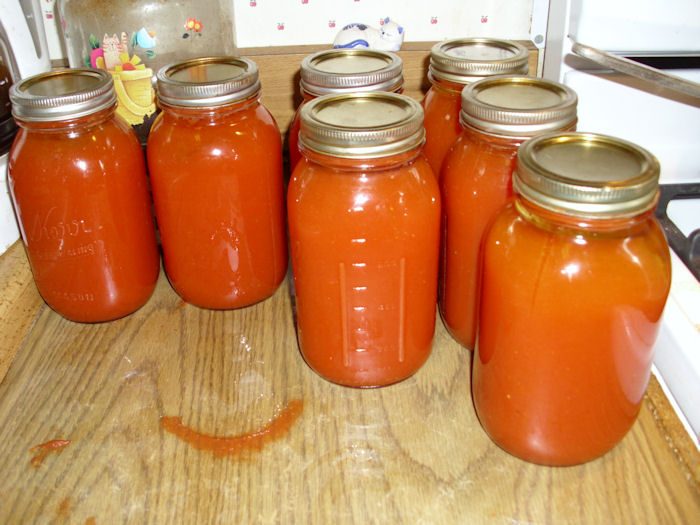 After the jars have set for a while, you’ll notice some separation. It will look as if the water in the juice has separated from the pulp. This is perfectly normal. Just shake the quart before you open it to recombine the water and the pulp. Making tomato juice is an exceptionally healthy way to enjoy tomatoes anytime. You don’t have to use any particular kind of tomato to make juice. In fact, the juice usually tastes better (fuller) if you mix several kinds of tomatoes together, so you can make juice out of odds and ends used for other purposes. Let me know if you have any questions at [email protected].